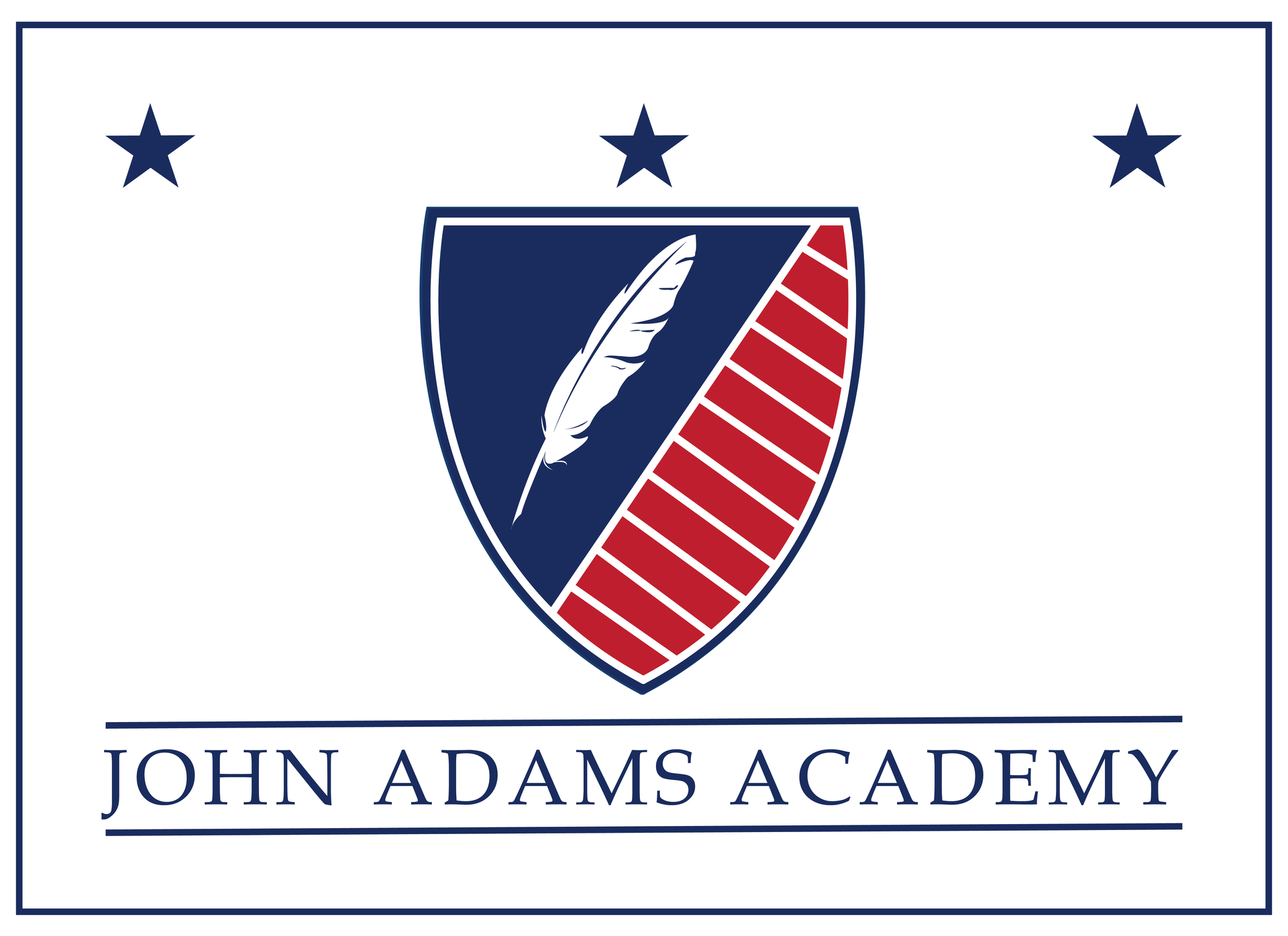 John Adams Academy is restoring America’s heritage by developing servant-leaders who are keepers and defenders of the principles of freedom for which our Founding Fathers pledged their lives, fortunes, and sacred honor.

This heritage is a legacy of pioneers and patriots, regardless of their nationality, race, religion, or cultural background, who have sacrificed their lives to protect the rights of all Americans. America was built upon several core principles that have become a force for good in the world, including 1) liberty, 2) equality under the law, 3) natural rights, 4) consent of the people, and 5) limited government. It is a tradition that is passed on to each generation, and each generation is responsible to make these principles available to all and to preserve them for future generations.

The elements and their associated meanings are described as follows:

The red, white, and blue of the John Adams Academy Flag are reflective of our vision to restore America’s heritage.  The official meaning of the colors used within the flag of the United States of America are:

Red: The struggle for independence with courage, strength, and valor.

The John Adams Academy Flag begins with a field of white.  White is an inherently positive color.  Beyond its traditional symbolism of faith and purity it also symbolizes light, goodness, understanding, mental clarity and harmony.  White is also the color of simplicity and perfection. White contains an equal balance of all colors, representing all possibilities.  Each individual is born with their own special excellence, their own gifts and talents, that are discovered, supported and developed within an American Classical Leadership Education™. All persons, regardless of background can achieve greatness.

At the base of the flag are the words “John Adams Academy” and two bold horizontal lines representing the foundation of liberty upon which the American Classical Leadership Education™ is built.  A free person cannot be truly educated through a system of coercion. Education is an individual stewardship of mind, body and soul that produces a liberated, self-governing citizen leader.

Rising from the foundation is “The Shield”. The Shield, as denoted in our Academy crest, has represented since medieval times a warrior’s primary piece of defensive equipment.  The bearer of a shield is a defender. The scholars, staff, and families of John Adams Academy are courageous defenders of freedom, truth, nobility, and the principles upon which America was founded.  Each takes up the shield of the warrior to protect and create the liberty-based environment necessary to all to develop in his or her own special excellence.

On The Shield is inscribed key elements of the American Classical Leadership Education™: The Quill and The 10 Core Values.

The Quill is a symbol of graceful and noble communication. The ability to think, speak, and write clearly are indispensable skills in moving forward the cause of liberty, recognizing and acting upon the good, loving and reproducing the beautiful, and articulating and disseminating the truth. Through graceful and noble communication, we receive the classics and the liberal arts—key elements of discovering truth, becoming liberated from ignorance, and being empowered to think and act critically. Through the classics and liberal arts, a scholar comes face-to-face with greatness and is inspired to causes greater than self—using his or her liberty for the defense and propagation of goodness.

The 10 white lines over the field of red represent the 10 Core Values of John Adams Academy which are fundamental to the culture and vision & mission of the Academy.  The values placed upon the defensive shield are an acknowledgment of the existence of a fixed standard of conduct and an anchor of stability and truth in a shifting world. The 10 Core Values are essential in creating the environment in which scholars develop the strength of character, knowledge, skills, and wisdom necessary to preserve freedom, serve their fellowmen, and walk a straight and steady course of principle-driven leadership.

Above The Shield are three guiding stars. Stars have long been used by mankind to navigate safely in a tumultuous world and arrive at the intended destination. Stars are fixed principles that lead us through uncertain times, allow us to keep our course, and fulfill our ultimate mission.   The three stars on the Academy flag represent points of focus necessary to stay on course in the development of servant leadership—truth, virtue, and wisdom.

Truth is conformity to fact or reality; exact accordance with that which is, has been, or shall be. Virtue is moral goodness and the practice of moral duties conforming to natural law. Virtue is strength and voluntary obedience to truth. Wisdom is right reason in agreement with truth and moral goodness by virtuous means. An end of education is a great soul who seeks truth, is schooled by wisdom, and has the virtue to act on that wisdom.. Truth, virtue, and wisdom embody servant leadership—the very heart of the John Adams Academy mission through which we are restoring America’s heritage.