Meaning and Symbolism of the John Adams Academy Crest 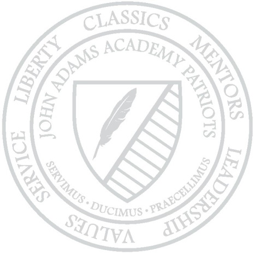 The Shield or escutcheon has represented since Medieval times a warrior’s primary piece of defensive equipment.  The bearer of a shield is a defender. The scholars of John Adams Academy are courageous defenders of freedom, truth, nobility and the values upon which America was founded.

The 10 Core Values of John Adams Academy are fundamental to the culture and mission of JAA.  The values placed upon the defensive shield are an acknowledgement of the existence of a fixed standard of conduct and an anchor of stability and truth in a shifting world. The scholars of John Adams Academy develop the strength of character, knowledge, skills, and wisdom necessary to preserve freedom, serve their fellowmen, and walk a straight and steady course of principle driven leadership.

The Quill is a symbol of graceful and noble communication. The ability to think, speak, and write clearly are indispensable skills in moving forward the cause of liberty, recognizing and acting upon the good, loving and reproducing the beautiful, and articulating and disseminating the truth.

Surrounding the inner shield are these phrases:

John Adams Academy Patriots:  A Patriot is a defender, one who vigorously loves, supports, and defends his country and its interests.

Ducimus: We Lead  (Denotes as a guide or mentor)

Praecellimus: We Excel  (To surpass, to achieve greatness)

The Outer ring includes the words foundational to our mission:

Classics: A great book that has a great theme, noble language, universality, and speaks to the individual.

Mentors: An individual of high moral character more advanced than the scholar to guide the scholar’s learning.

Leadership: Leadership education presupposes that each individual is born with a unique and singular mission to fulfill.  A John Adams Academy education consists of discovering, preparing for, and fulfilling this mission. Classically educated leaders are prepared to motivate and inspire individuals, communities, and nations to a greater good and to be keepers and defenders of the principles of freedom.

Values: A moral and ethical character is necessary for the preservation of a peaceful, productive, free, and happy society. All true greatness comes from doing the right thing even when completely alone. John Adams Academy scholars receive the type of education that will develop greatness of mind and character in order to become an individual of integrity and sound judgment, prepared when called upon to perform the mission unique to them.

Service: Our mission is to develop servant leaders that internalize the skills, methods, and structure of a John Adams Academy Classical Leadership Education who will then desire to make a difference in the world and go forth to heal society, preserve freedom, and contribute to matters greater than self.

Liberty: For the founders liberty was the fundamental American value.  The Declaration of Independence speaks of “life, liberty and the pursuit of happiness.”  It was liberty that Patrick Henry declared himself willing to die for.  Thomas Jefferson said, “Rightful liberty is unobstructed action according to our will within limits drawn around us by the equal rights of others.” Liberty is the right and power to act and express oneself as one chooses as granted by the state. That state will do everything necessary to protect that grant but under which individuals must govern themselves, taking responsibility for their own actions and behaviors and qualifying themselves as active citizens of a free republic.

All the above were intentionally set within concentric circles universally symbolizing unity, totality, wholeness, timelessness, the self, and the continual improvement of that self.  Circles are also often seen as protective symbols, so standing in adherence to the principles within these circles symbolizes a protection from dangers and influences of a society of lost values and democratic ideals that we might not relinquish the privilege of self-government that a “nation conceived in liberty…shall not perish from the earth.[1]”