American Classical Leadership Education® is a liberty-based education that leads a scholar to servant leadership through the pursuit of truth and the development of virtue and wisdom. It is John Adams Academy’s unique model of education formed after the education that produced the great servant leaders who founded our great nation.

To understand and to implement such a model, one must first look to what it was about America that produced such great servant leaders. Some leaders had formal classical educations—Adams, Jefferson, and Madison. Some did not. Some were self-educated. George Washington independently read the books his brother sent back from England. Fredrick Douglass fought for his own education which ultimately lead to his liberation from slavery. Benjamin Franklin was self-taught as a young apprentice giving up eating meat in order to afford the purchase of books. Abigail Adams had no formal education but learned from the classics in her family library. She was articulate, astute, and had a keen political mind. But what they all had in common was they were all rooted in liberty and engaged the liberal arts through the classics and mentors, which prepared them for servant leadership.

An American Classical Leadership Education® is not the education of the old-world aristocrat. America rejected the notion that aristocrats were the sovereigns and the birthright leaders. In America, where everyone is sovereign, there is a natural aristocracy of servant leaders rather than a hereditary aristocracy. America proclaimed in the Declaration of Independence that each individual had unalienable rights to life, liberty, and the pursuit of happiness. In America, the common man was not a subject anymore.

This novel concept naturally leads to a classical education that has this American notion of liberty at its foundation and leadership and service at its heart. 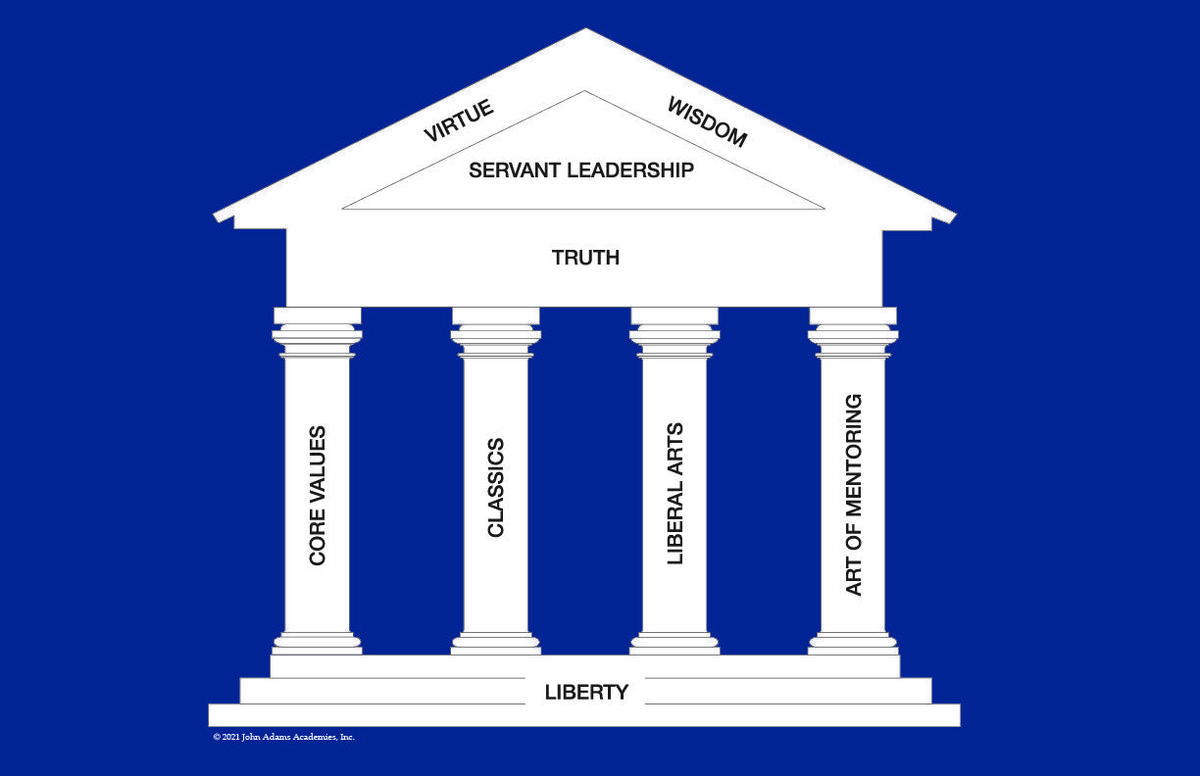 The graphical representation of the Academy’s American Classical Leadership Education® depicted above is a model of becoming that should be used throughout life as one continually strives to be a servant leader.

The foundation of this model is liberty, upon which the four pillars of education are grounded. It is liberty, not force, that constitutes the basis of an education of a free people.

Standing upon the firm foundation of liberty are the pillars of an American Classical Leadership Education®. The pillars are:

The first pillar of the American Classical Leadership Education® is core values.  The core values are the culture that enriches the fertile environment for the development of servant leaders. They are the language or currency used to express our leadership and character-building educational program.

It is through the pillar of the classics that a scholar engages in the Great Conversation that asks age old questions, and thereby discovers what is good, true, and beautiful. As with our national founders, classics hold the potential to transform a scholar into a wiser and more liberated servant leader.

These pillars of education liberate the scholar by enabling the scholar to discover truth. The scholar is invited to act on that truth and in the process grows in wisdom. It is by thoroughly engaging in the classics and by the examples of great mentors that a scholar is inspired to develop the virtue to do what is right. These are the necessary pillars for the cultivation of servant leadership of self-governing citizens who choose to serve, particularly in keeping and defending the principles of freedom throughout civil society.